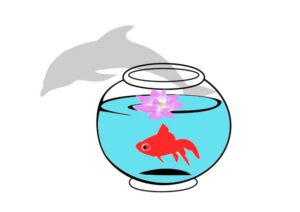 Then a snail came along and said that she knew an even more incredible story, one that they had certainly never heard before and that she had even experienced herself! The moray, happy to be allowed to rest for a while, retreated into its cave, only sticking out its little head with interest, because of course it was also curious to hear what the snail had to tell. Then the snail began with her story.